Discover in video the unique model of Alchimie

Since its creation, Alchimie has aggregated more than 60,000 hours of content established with more than 300 prestigious partners including Arte, France TV distribution, ZDF Entreprises and Zed.

Here is an overview of the Alchimie's channels 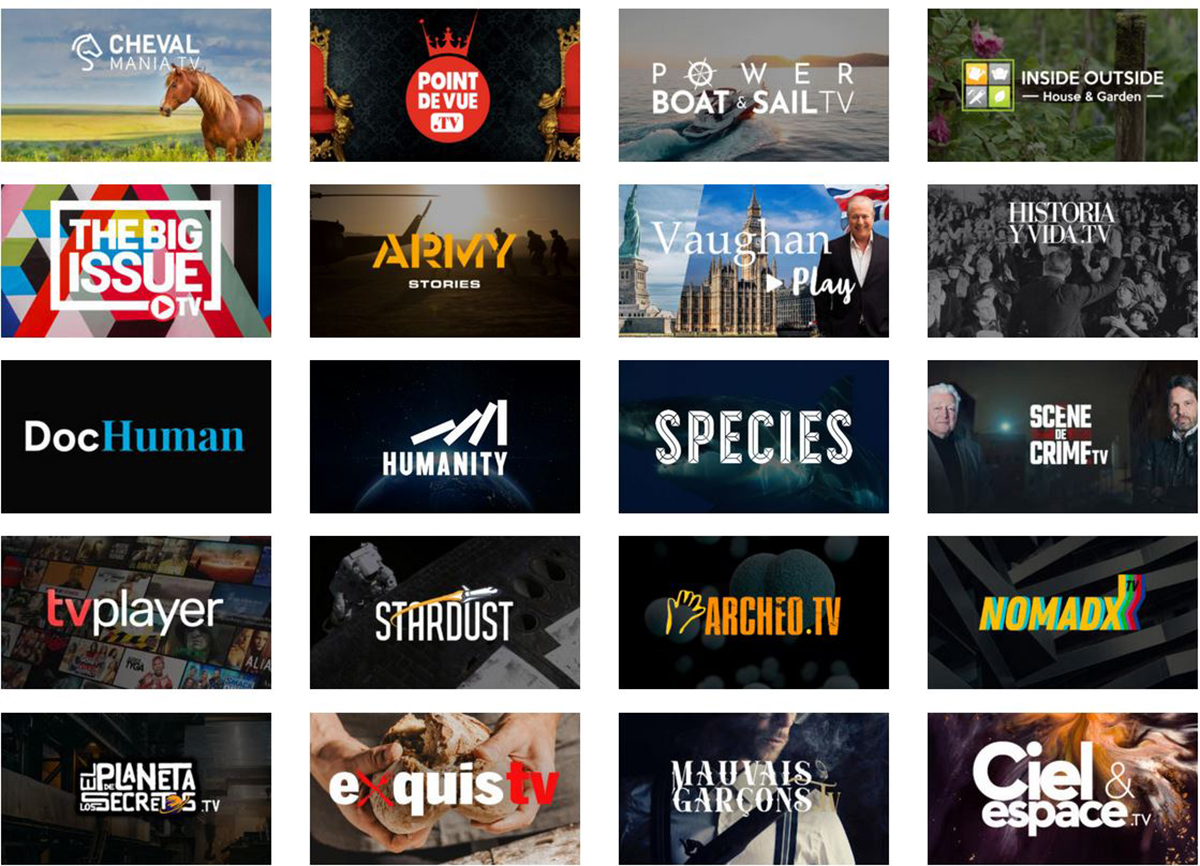 In addition to its content catalog and distribution network, Alchimie has a proprietary application (TVPlayer) that allows direct access to its channels and a recognized technological platform allowing the industrialization of the marketing of SVOD channels.

The Company has thus succeeded in positioning itself between the extremely fragmented world of rights owners and that of distribution platforms, through the publication of original and exclusive thematic affinity channels.
This model, present in the music and video game worlds, is a first in the world of video and television.

A booming thematic television market driven by the explosion of OTT players...

As a result of these trends and new ways of consuming content, new players have emerged, gradually becoming major players in the audiovisual sector. They offer original content, intuitive user interfaces and low prices with no long-term commitment. Indeed, the dissociation of content and hardware is paving the way for the development of OTT television offers that work across all platforms via a subscription taken out on the Internet.

In parallel with the offer of catalogs of premium movies or series, thematic content offers have been developed, as digital has made it possible to lower the cost of launching an SVOD channel to a few thousand euros.

... structurally supported by the "cord-cutting" effect ...

By cancelling subscriptions with traditional television operators, whose annual price is often high, consumers have created the phenomenon known as "cord-cutters". They have reallocated their budget by buying a TV box (Android TV, Apple TV, Roku, etc.) and subscribing to video-on-demand services (Netflix, Amazon Prime, Disney+, etc.). The churn trend within the "cord-cutters" represents several million households per year, constituting a business opportunity estimated by Alchimie at approximately 10 billion dollars per year1.

... and accelerated by the pandemic

In addition, the lockdown linked to the Covid-19 pandemic has intensified the "cord-cutting" effect.

As an example, the 10 most important American providers of premium television services in terms of number of subscribers have thus cumulatively lost 2.3 million subscribers between January and March 20202. 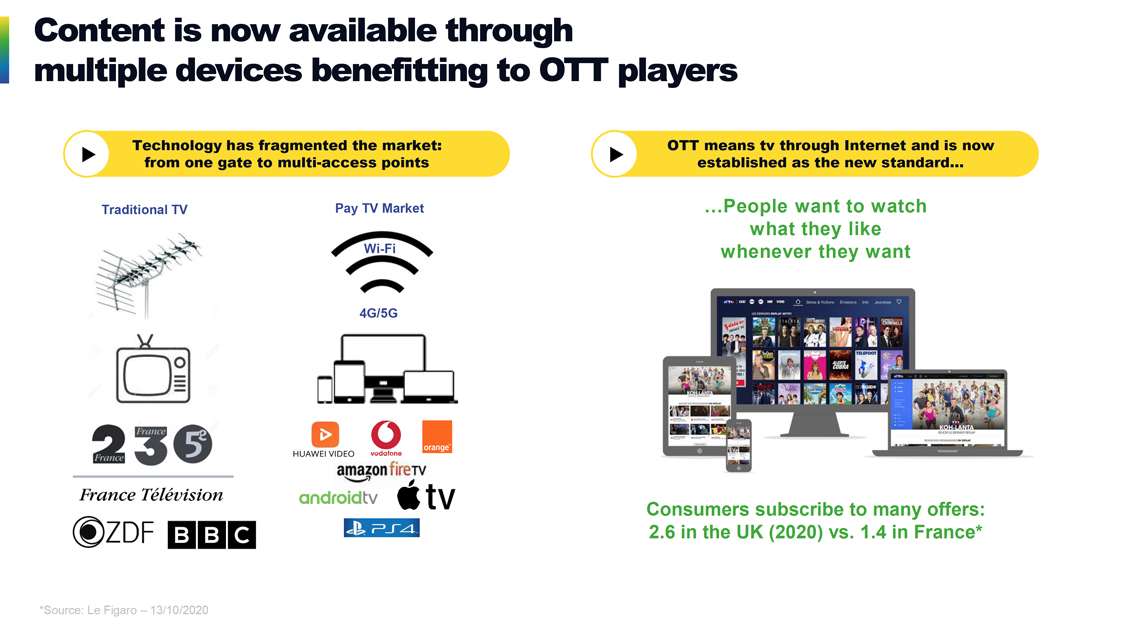 A solid model that fuels the success of affinity thematic content

The Alchemy model is based on 4 pillars:

Revenue sharing, a business model that benefits all stakeholders

Alchimie has built its business model on revenue sharing with a percentage distributed to the different rights owners whose contents are proposed in the offer. Since its creation, Alchimie has developed close relationships with leading rights owners in terms of thematic content such as Arte, France TV distribution, ZDF Entreprises or Zed. The rights owners open their content catalog to Alchimie and benefit in return from an original value proposal, based on revenue sharing and not on the payment of a minimum guaranteed.

The balance available after remuneration of the rights owners is then distributed between Alchimie, the talents or media groups and the distribution platforms.

Like many digital platforms, Alchimie's business model will generate so-called "network" effects. These effects maintain the dynamic growth by creating a virtuous circle. The more rich, diverse and up-to-date the content available on SVOD channels is, the more it will allow the launch of different and original SVOD channels. The more differentiated the SVOD channel catalog becomes, the more distributors will be interested in creating partnerships and giving visibility to TVPlayer in particular, thus increasing the subscriber base. The visibility and potential of subscribers will attract new talents and media groups willing to launch their own SVOD channel, which will feed the demand of new rights holders to monetize their content via Alchimie and so on. 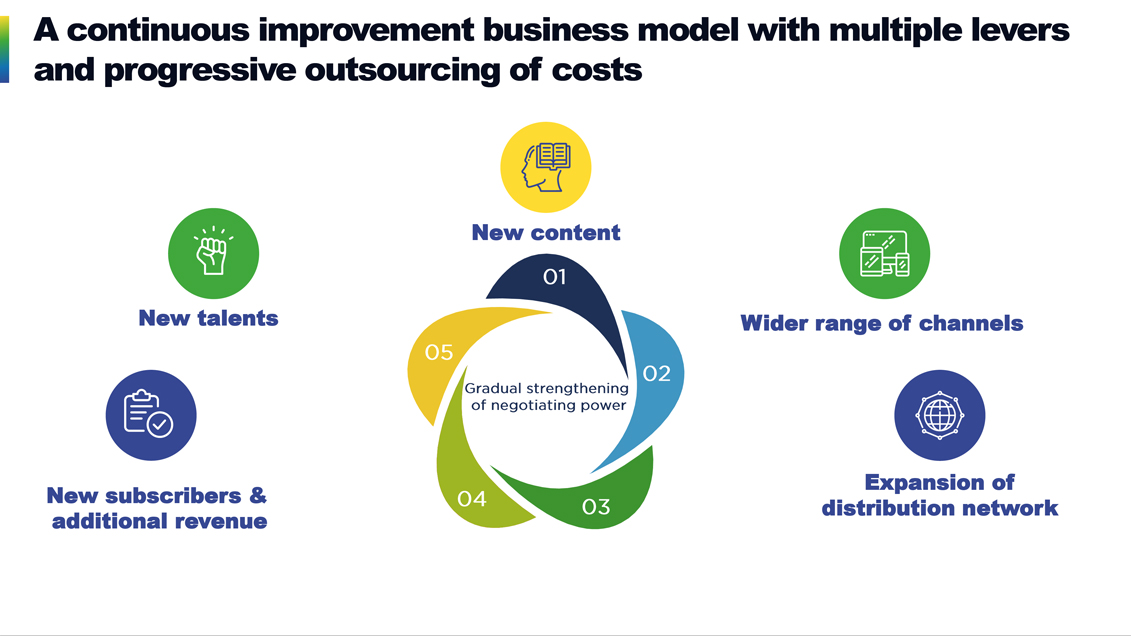 1 Source: https://nocable.org/learn/cable-tv-cord-cutting-statistics/
2 Source: Informitv Multiscreen Index: Television Subscribed numbers at the end of March 2020 for the 10 leading pay-tv services in the US

Ask us your questions Suscribe to the Newsletter